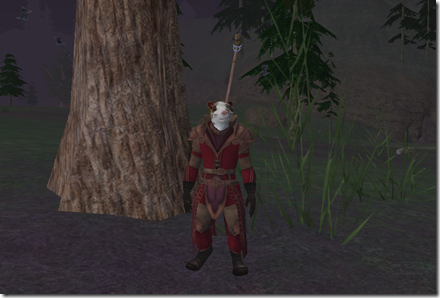 After playing 6 different classes to level 14ish I finally decided to stick with one until twenty. Above is a picture of my level 20 Coercer, in amazing looking (and free!) appearance gear that I got for buying the game. I’m still not sure whether Coercer is going to be my main though, since it seems kind of like a Necromancer that takes much more attention to solo with. My “pets” don’t keep aggro literally at all, so I’m pretty much rooting and DPSing things down. Usually what happens is that I accidently pull three mobs so I Mez two and start DPSing the third, and that’s when my screen flashes yellow (meaning my tamed mob has just broken free).

Surprisingly, with how bad I play him, I’ve only died a handful of times. One of them was to a guard. My tamed pet broke free near one, and I managed to retame it before the guard killed it, which I guess flagged me against that guard because she came after as soon as she one shot my tamed mob. The second death happened in the capital city. Apparently there are huge cliffs littered throughout the cavern city, so I would recommend paying attention to where you are walking.

Speaking of walking in the capital city of Neriak, it’s a pain in the behind. Thankfully after a very confusing quest I gained access to the teleporters that are littered throughout the city for travel convenience.

So far there are several things I’m loving about the game, such as gathering nodes for leather and meat being little animal burrows where you “catch” them. It’s just like mining nodes, but I enjoy it MUCH more than skinning. Since we are talking about crafts I need to just say that CRAFTING IN EQII IS AWESOME! It’s not a boring “click here and AFK” system like in most games. I’m not through with the tutorial yet as I need more materials, but you start your recipe and then use abilities in order to succeed, including reacting to unforeseen events. It’s literally like fighting mobs, but in crafting form.

There are a few things I don’t like either. For instance I still haven’t seen anything that might be called a sun. Sure this is probably because I am evil and Neriak is the only starting city that isn’t the original lame Freeport starting quest island thing, or filled with terrible looking dragon people, and the surrounding area is called Darklight Woods. Still, it’s getting a bit dreary and I hope that there actually IS a sun in the game.

There are also a ton of things I just don’t understand yet. I’ll leave all of those for another post, a long post.

So far I’m having a blast in EverQuest II and I am looking forward to getting a bit higher and experiencing more of the content. Which my Coercer though? I’m not sure about that. I kind of want to play a clothie class since I have a free set of clothie appearance gear.

Also, what level am I going to have enough for a mount at? I see you can use them at level 1, but what kind of timeframe can I realistically expect to have the plat required to purchase the basic mount? I guess I’ll find out.