My name is Captain Amuntoth of Clan Teklik, Ensign in the Federation. I’ve been ordered to return to Earth Spacedock 1 as quickly as my warp engines can get me there. I’ve just had one quick stop to make on the way.

Ensign Selvok: “Well Sir, though I’m still not certain that this is within Starfleet regulations…”

“Selvok what did we talk about?”

Ensign Selvok: “That my Vulcan heritage counters my emotions, thus making me a genetic freak in need of purification Captain.” 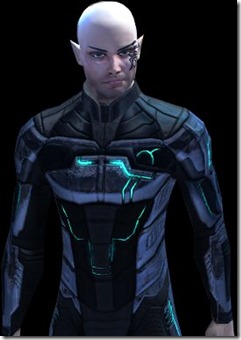 Ensign Selvok: “Did it have to be on my face Sir? I don’t recall any other Starfleet Officers needing to have this skin graft done.”

“Ensign Selvok, report to Ensign Arikin for another cleansing immediately.”

Ensign Selvok: “Yes Sir, shall he use the knives or the electrodes Sir?”

“Tell him to use the electrodes, and record the session for me, I’d like to listen to it later.”

Ensign Then: “Sir we are near orbit, but we’re picking up several Klingon ships uncloaking!”

“Prepare for evasive maneuvers! Lock phasers onto the closest ship and fire!”

Ensign Then: “Sir, three Gorn ships are coming out of warp!”

I flipped the comm switch “Fire everything we’ve got at the Klingon ship and then hold out until we get back! Arikin report to the bridge! Selvok, Then, Dettin and Irsem meet me in transporter bay three. We’re beaming down to the planet.”

Ensign Then B’hyph followed on my heels as we made out way to the transporter.

Ensign Then: “What are we looking for on this planet sir?”

“There’s a scientist on this planet. I heard about his work while I was in the academy. He’s working on a plag…” the ship listen heavily to the side and the emergency klaxons began blearing and we began walking faster. The others in my Away Team met me in the transporter room and we beamed down immediately.

We beamed down outside of the facility and were immediately beset by Klingons.

I didn’t wait for them to fire first. It appeared that they were capturing one of the scientists. I made sure they wouldn’t get him in my first volley.

There were too many of them for an open fire fight, too much risk. I ran at them as I shot. If I could get close to them they might be less likely to use their phasers. I picked up a Bat’leth from one of the dead Klingons.

“Alright you Klingon dogs! Let’s see if you’ve got what it takes.”

She swept my legs out from under me. Perhaps melee wasn’t my destiny.

“Someone shoot this whore or I’ll boil your heads!” I croaked, the wind knocked out of me. She lowered the Bat’leth toward my throat. It was there for only a moment before I heard the crackle of a phaser blast and the sick smell of burning flesh. It was a good day to die. But for them I mean, it was far too hot for me to die. I don’t do well with the heat. 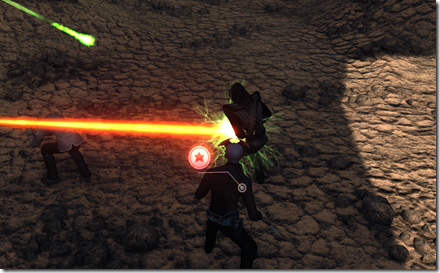 Looks like they had more than one scientist. I’ll take care of him just as soon as I finish with these Klingons.

“AHAHAHA Eat Bat thingy Forehead!” Klingon blood has a certain smell to it. Humans might not notice but human blood is bitter, not like the Klingons. Their blood smelled sweet, like honey in the spring.

Ensign Arikin: “Sir we’ve disabled the Klingon ship but we detected a transport just before their power went out. Probable transport to the planet.”

Ensign Arikin: “We won’t last much longer Sir, recommend you get back up here and we disengage.”

“I understand ensign. Keep them engaged.”

We burst down the door to the small research building that doubled as a hanger for the scientists stuck here. The doctor was tussling with an old Klingon, high ranking judging by the uniform. I shot him in the back before he even knew we were there.

That was when ensign Arikin beamed down to the planet. He appeared next to the doctor, his breath coming quickly.

Ensign Arikin: “Sir! The ships shields are down, there are at least a dozen Gorn ships up there! Other Federation vessels started showing up, but I had to abandon ship.” 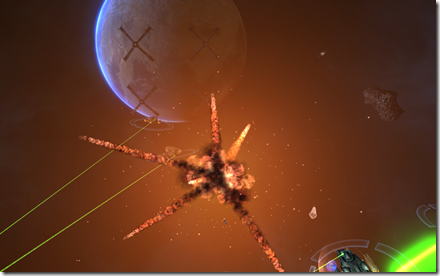 “What about all of the others? Did you sound the abandon ship?”

Ensign Arikin: “Of course not Captain, that may have impeded my own escape.”

I couldn’t help but smile. Arikin was truly my protege. Ensign Selvok was bringing the unconscious scientists back to wakefulness as we discussed possible escapes. We settled on taking the scientists shuttle and escaping into the jungle if the battle above ended badly. I secretly made plans to barter my surviving crew members for safe passage with the Gorn if need be. 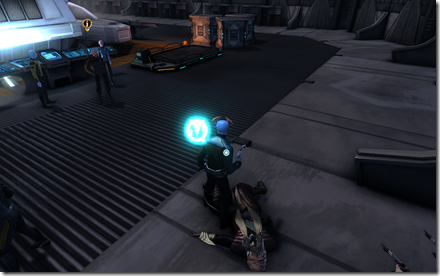 Being Captain was nice while it lasted.